So I may have skipped the recaps of a few challenges. Not for any particular reason, probably. Just life, and a bunch were repeats. So here’s a quick recap before we get to the shining star moment that has changed my life and one of my ice breaker “fun facts” hopefully forever!

Since Xolair, and post spinach and lox, I’ve challenged sesame, hummus, pickles (cucumbers + dill), and cooked blueberries to great success. I also challenged raw broccoli to a lack of success, but I didn’t get sick, either — just had that feeling where my body said “stop” and my doctor looked at the way I was contorting my face and said “stop” so I stopped and went home sad because I’d been literally dreaming about eating broccoli. But all’s well, because I can still challenge it cooked at some point.

So then, today. We’re about a year into Xolair, which is crazy! I decided to challenge romaine lettuce, because Passover is coming, and it’s been really painful for me to not be able to participate in the ritual in which romaine lettuce (known as maror) is consumed in memory of the Hebrew slaves’ bitter lives in Egypt. Fine, so it’s not the most fun ritual in all of Judaism, but there’s something about being excluded from a religious practice that’s hurtful. It’s hard to describe if you haven’t felt it before. It’s not that I will “get in trouble with God” if I don’t eat maror — quite the opposite — but it feels strange to watch other people do this thing, this important thing designed to build on a connected tradition, and know that doing so can kill you. That this avenue is not an avenue you can take to connect. So I wanted to at least give romaine a try before Passover in the hopes that this year, I can partake in the ritual for the first time in years, and for the first time ever without getting sick.

And, drumroll…I can! And to quote the amazing Gina Rodriguez of Jane the Virgin fame, I can and I will!

Much like with spinach, I began the challenge by turning over a lettuce leaf in my fingers. Feeling its curves. Experiencing its texture. Finally, after singing comforting songs to myself to eradicate my fear of lettuce, I ate it. Six leaves worth. It was delicious! I could literally feel the nutrients I have been deprived of for so long coursing through my body. If that sounds ridiculous, it’s because it is. And I don’t much care, because it’s how I felt. I feel healthy and vibrant and peppy and I cannot wait to eat more lettuce.

I’m limited to six leaves at a time, three times a week, because Xolair is a miracle drug but not a cure. But that’s fine. Six leaves of lettuce, five leaves of spinach, and some tomatoes, peppers, and dressing? That’s a side salad if I ever heard of one.

I am in complete disbelief, still. But a thrilled disbelief.

For so long, I’ve been introduced to people as Cindy, the girl who can’t eat lettuce. We can leave the emotional baggage of that for another time, but for now…I’m excited to see which random identifying factor people choose now.

Cindy, the girl who lived (after eating lettuce, not after a curse from Voldemort #spoileralert #sorrynotsorry).

Allergens: 2 (but it was more of a draw)

Up Next: Cottonseed oil 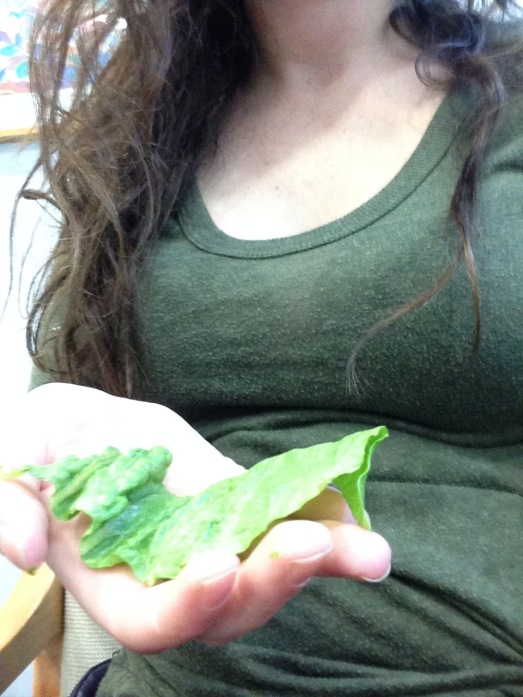 There is lettuce in my hand. And no hives on my chest. This, my friends, is the magic of Xolair.